These heroes come with the Thunderstone Quest giant box, representing placemarkers on the board. You could just use a little wooden meeple or something, but these are fun minis to have instead, and so I painted them. 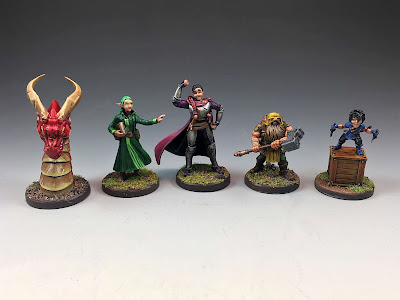 Every game miniature must be painted This is a mantra my wife has established - the the point that any new game with gets opened and primed right away - no questions asked. There will not be a play of the game until paint is on those minis. No exceptions.
Pirates vs British... Sword and Sorcery... Lord of the Rings: Journeys Through Middle Earth... First Martians... Really! So when we ordered Clank! Legacy for our monthly couples game night this month, I knew I was going to have about a week to prep the game for play. I am most happy with the cloaks and the dragon. I was going to paint the dragon Green, but Jen though he should be Purple or Red. So Red he is and I'm happy she made that choice... it's a good color for a dragon. 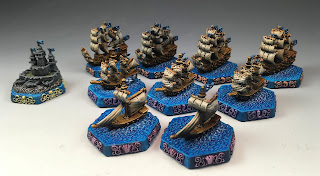 French vs Buccaneers The naval combat game came to my attention via the d6 Generation podcast. I was intrigued by the models and the fun description of the game from Russ and Craig. I picked up this Vol 2 on eBay for less than the Kickstarter cost and painted it using primarily Citadel Contrast paints. They are a bit 'thin' on depth, but they do a good job of establishing a strong color with a pre-washed effect in the recesses. 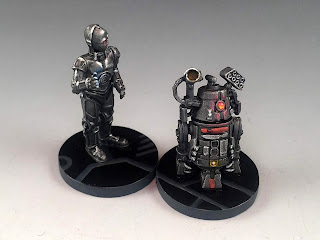 0-0-0 (Triple Zero) and BT-1 (Bee-Tee)
Imperial Assault - Imperials - Villain Pack - Wave 9
The comics that Marvel started putting out in 2015 , that follow immediately on the end of "A New Hope" are very entertaining. These two characters, along with Dr. Aphra, were introduced in the Darth Vader series, and I really enjoyed them. They take me back to a droid in Knights of the Old Repulbic, who held a barely concealed contempt for living beings. They are free to act without regard to morals or consequences and they are disturbing for it!

I wanted to focus on the bits of color on there otherwise fairly dark, brushed metal droids. I didn't want to paint BT-1 as straight black, so went for a dark silve. I also probably over played the blue on 0-0-0's hand, for effect.

I hope an expansion for Star Wars: Outer Rim uses these droids. 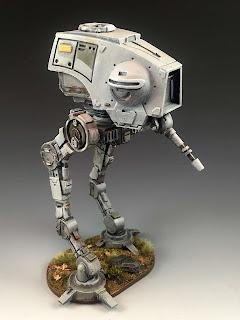 AT-DP
Imperial Assault - Rebels - Ally Pack - Wave 10
This is my final vehicle to paint for Imperial Asault, barring any new expansions.I avoided it for a bit, but it was surprisingly simple. Maybe I'm getting better at this, haha.

It took about 3-4 days with an hour here and there to finish this walker. I could see spending more time on details. More wear, more rust, more scorch marks. I stopped after about 20-30 minutes of adding this level of detail. I also left some "messy" bits, bt overall the effect is something I'm happy with.

Maybe I'll come back and add more later if no more IA expansions come out. Have you painted your AT-DP? Did you go for any more specific markings? I'm curious about faction or unit markings, that could be really cool. 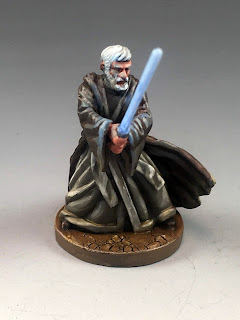 Obi-Wan Kenobi
Imperial Assault - Rebels - Ally Pack - Wave 7
I finally am wrapping up my final Star Wars Imperial Assault figures. Obi-Wan is an ally pack not tied to a specific adventure, so I had skipped him by. I am happy to have returned to him, and in the path of a new movie coming next month!

His pose is standard, but allows for some fun object source lighting - something I am working to improve. I need more patience, I know. Maybe after I quit my day job... :)

I followed Sorastro's advice on YouTube, though I did go lighter blue on the saber. I didn't want a dark blue tint so I used the Edge paint series mixed with the Glaze to make the blue more pastel and less directly blue. I also highlighted the desert floor a bit. 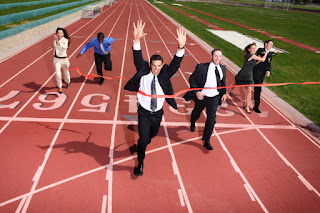 I think most gamers usually fall on one side or another of dividing line between prefering to Finsih something and endlessly Questing.

Finishers like finishing a game. Solving a puzzle. Succeeding at a campaign. Checking off a completed box.


Questors are enamored by the effort taken to get through something. They seek out the struggle and the Quest more than the Finish. I'd say maybe they are almost let down when the campaign is over, or the puzzle is solved.

I, at this point, am a Finisher. I am starting to think I need to meditate on anything I finish, to give it time in my mind to find out what it is I valued about playing or attempting this activity in the first place. I seem to have an endless supply of new thing to take on stacked up in front of me, but maybe need to contemplate why more often.

Relishing the Quest appears to be more virtuous, by nature. Am I on track with something here? Let me know if you are  Questor or a Finisher, or if I am way off here! Please, share y…
Post a Comment
Location: Anchorage, AK, USA
Read more
More posts

Bneffer
I am an avid and always learning painter of miniatures, mostly for board games. I am newly into modelling with Games Workshop sets, as well.